The Problematics Implementation of Law and Regulations Testing in Indonesia

This work is licensed under a Creative Commons Attribution 4.0 International License. 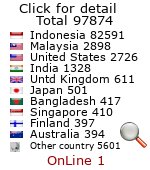